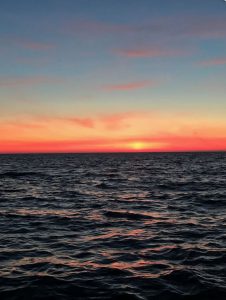 True Blue WNY Fishing Charters of Western New York takes people out on the boat to fish Lake Erie at hotspots like Barcelona Harbor near Westfield, southwest of Buffalo. Some of the fish we catch include smallmouth bass, steelhead, lake trout, brown trout, yellow perch and walleye, among others.

Lake Erie is a great place to fish and there are a lot of different fish in its waters and tributaries. There are panfish which swim close to shore and/or around marina docks. They can be caught using worms or minnows. These panfish include yellow perch, white bass, and crappie. Then there are the sportfish, available in both warmer waters and colder waters. In the warm water of Lake Erie, expect to find walleye, muskellunge, northern pike, smallmouth bass and largemouth bass. In the cold water of Lake Erie, expect to find lake trout, chinook salmon, steelhead/rainbow trout, brown trout, coho salmon and atlantic salmon. Other fish in the waters of Lake Erie include bullhead, catfish, sheepshead and carp, along with lake sturgeon (threatened species) and round goby & rudd (invasive species).

Smallmouth bass are a major reason fishermen come to Lake Erie. There are plenty of them, and some are trophy size. One time an eight pound, four ounce smallmouth was caught on Lake Erie. Generally, though, you’re going to catch ones in the 4 pound class. It wouldn’t be odd to catch 20 to 50 a day if you’re in a great spot!

Yellow perch travel in schools, so if you catch one, chances are there are plenty more down there, nearby. A lot of people like to eat the yellow perch they catch using minnows or worms. Back in 1982, a yellow perch weighing three pounds eight ounces was caught– maybe you’ll be the one to break that record.

Now about walleye– it’s one of the most popular sport fish anywhere and Lake Erie has plenty of big ones. Indeed, Lake Erie is one of the best spots in North America to catch walleye in the 4 to 7 pound range.

Want to discuss what kinds of fish you’re likely going to find when True Blue takes you out on Lake Erie? Call 716-830-9098 today.