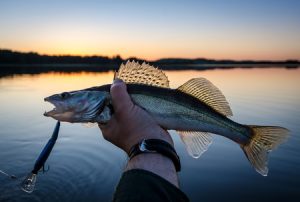 True Blue WNY Fishing Charters takes people out fishing on Lake Erie, Lake Ontario and the Niagara River. From June to September you can book with True Blue to go out on Lake Erie and try and catch walleye. On the Niagara River, that season extends into October. Western New York waters are filled with walleye– people come from near and far to catch them.

What are some interesting facts about walleye fishing?

Did you know walleye are named for their eyes? They have a reflective film of pigment covering their eyes. This adaptation helps them see in murky waters.

Walleye are the biggest members of the perch family. They’re common freshwater game fish. Typically, you’ll catch them when they’re 10 to 18 inches long weighing between one and three pounds. Color-wise, they’re olive and gold with their color fading to white on their underside. You’re likely going to notice large dark spots on their back and smaller dark spots on their fins. And in their mouth? Walleye have razor-sharp teeth!

Where they Gravitate To

On clear days, walleye tend to be in deep waters– they are sensitive to light, after all. Toward nighttime, walleye will come closer to shore. In general, you’re likely to find them in depths of 15 to 30 feet. They prefer cold water over warm water and are most active on windy, overcast days. Western New York has lots of windy, overcast days.

The lifespan of a walleye is about 10 years. One of the oldest ever found was estimated to be about 29-years-old. If and when they have babies, neither the mother or father care for them– they’re on their own from birth.

If you’re thinking of eating walleye, know this: they taste delicious. They make for finely textured meat. They taste so good that they’re usually the most sought after fish for those who like to eat what they catch.

Do you want to see if you can catch some walleye on Lake Erie or the Niagara River? Use this page, or call True Blue WNY Fishing Charters at 716-830-9098. You can also email dansank@truebluefishingcharter.com.